Thoughts on the market for education/children's apps

(Originally drafted this in October 2011. Writing about COPPA got me a little hot under the collar so I took a break to cool down and then things got busy. Figured I should finish this before posting new stuff.)

Ran into a question on Quora that got me thinking. "Why is there a lack of innovation in educational technology for school-aged children (compared to high school & higher ed)?"

As an app developer, I'm going to interpret this as "Why are there cool apps for high school and higher, but not for elementary school?" The four reasons I see as the cause for this situation can be summarized as money, demographics, mix of skills, and legal.

On the real money-trail side, a look at some numbers from Distimo's June 2011 report and 148Apps.biz's App Store Metrics from late September 2011 show that the money just isn't there.

Distimo's numbers show a standard power law distribution with a couple of categories accounting for a vast majority of the downloads. Games and Entertainment account for about 65% of the free app downloads on iTunes and 75% of the paid app downloads in the US. Books and Education account for somewhere between a low single digits percentage share to 'too small of a line to be visible'. 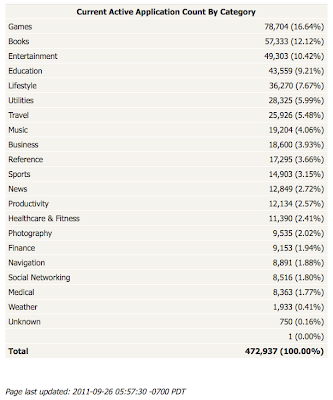 Money attracts attention and talent. The more people you have staring at a problem, the more likely someone will come up with something cool. That's not to say that those of us working in the education app space can't innovate. By the numbers, it'll just take us more time to saturate the ABC and periodic table sides of the spectrum and start filling in the middle.

The number of developers might be proportional to the number of apps (and therefore there might be a lot of education developers even though there isn't as much money in it), but I suspect this is not the case. My guess is that many game development shops these days have multiple full-time people working to produce a game from a game designer, a sound designer, a graphic artist, and multiple developers. Most apps in the book and education categories are probably from much smaller one and two person operations. The description for one of the top flashcard apps even says that the developer only works on the app part-time as hobby. You don't have to be full-time to make a great implementation of a new idea, but the odds of creating something great are probably in favor of those who spend more time working on it.


Demographics
There is a natural tendency to work on problems that you see. App developers are fairly young on average. Most probably don't have kids and those that do probably have very young children -- thus the plethora of ABC and 123 apps. Other developers can probably only think back as far as high school. It's hard to think of a time before you knew algebra and how you learned it.

Mix of skills
Producing a quality education app is hard. In addition to development skills, you need skills in graphic design, sound effects and composition, user experience design, and teaching. That's a lot of different skills to bring together. With games, you can play with them and pick apart what made things fun for you. With educational apps, there aren't as many examples to learn from and it's harder to analyze them because you already know what they are supposed to teach you.

Developing apps for users under 13 years old requires attention to COPPA, which restricts innovation and use of standard practices without offering any real protection for children. With COPPA, you can't associate an installation of the app with any sort of identifier and no custom messages are allowed.

With the way they've crafted their no custom message rule, there's no free form text allowed anywhere. You can't have a 'name' field where they could put in their full name, but you can have fields for first name and last initial which makes no sense because there's nothing to stop them from just putting their full name into the first name field. By the letter of the rule, kids are not allowed to share their art directly from their kid-friendly art app. They'll just have to hit the home button and open the email app and attach the image from there. The rule does nothing here but throw up a usability speed bump.

Here are some of the things that you can't do without some sort of identifier:
Some developers are okay with working under the assumption that they won't get in trouble implementing some things that technically violate COPPA as long as they're not violating the spirit of it and using the gathered info for aggressive direct marketing. I'm not. The whole idea that I might be trying to bring joy and learning to kids one day and get slapped with a $50k fee the next day is nauseating. It's an extra hardship on top of the struggle to be profitable while doing good.

So why aren't there better educational apps for elementary school kids? It's hard, you don't end up with something cool that you can show off to friends, there's no money in it, and you might get in trouble with the government.
Posted by Steve Song at 10:27 PM